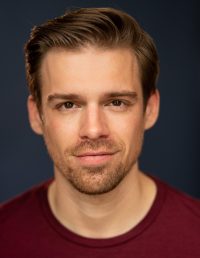 BOVTS: York in Henry VI: Days of Rebellion, M in Lungs, Medvedenko in The Seagull, Brutus in Julius Ceaser. Pre-BOVTS: Fleance in Macbeth (Lincoln Centre Theatre), Dakin in The History Boys (Palm Beach Dramaworks), Fourteen productions across seven seasons at the Illinois Shakespeare Festival, some notable roles have included: Caesar in Julius Caesar, Claudio in Measure for Measure, La Beau in As You Like It. Training: BFA in Acting from Ball State University, Studio member at The Freeman Studio in New York City.