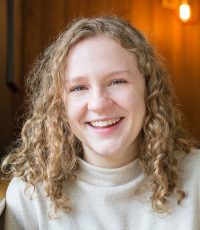 Maddie writes what she thinks people feel, but don’t talk about enough. Her work strives to utilise all the theatrical elements of the stage, including the audience. She is a proud Scottish female playwright so you will recognise strong female characters and ideas of national identity in her work. Maddie’s writing will take you on a journey through tears and laughter, then spin you round to reveal something familiar yet unexpected.

Maddie is a writer for stage, screen and radio. She is currently working on her play ‘The Predicament of Living’ in preparation for its July 2020 showcase. The play follows a young woman who speaks to us from her family kitchen which now feels too big for two. Remnants of loved ones grace the walls that come to haunt her. She controls the space, transforming it into an autumn day or a solemn Christmas scene as she tells her stories. The environment around her becomes a character, defying her orders, rebelling against her. Exploding, much like her mind.