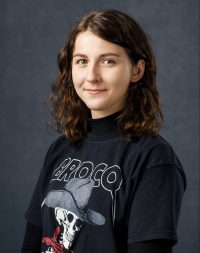 During her BA Top-Up year, Jasmine is studying dress symbolism in late 18th Century France, focusing on tailoring and recreative practices. Alongside historical studies, she is also interested working on-set in film and television, having previously completed work experience on ‘Worzel Gummidge’ (Leopard Pictures, BBC1) and ‘Peaky Blinders’ (Tiger Aspect, BBC1). Credits during training include: ‘The Book Club’ as standby/supervisor; ‘Far From the Madding Crowd’ (Redgrave Theatre) and ‘Kyoto’ (Wardrobe Theatre) as costume maker; and ‘Troilus and Cressida’ (Redgrave Theatre) as costume supervisor.

Far From The Madding Crowd