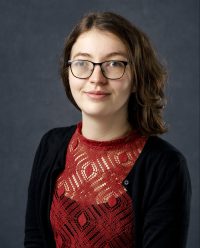 Frances is specialising in TV and Film during her final year at BOVTS with a particular interest in the Production Department. She is looking for work as a Production Runner. Alongside her course requirements, Frances also works as an assistant for Full To Bursting Prop Hire where she helps source props for the film, TV and the theatre industry and also helps set up props for photoshoots for the website, Facebook page and Instagram. She has also had work experience as an Office Runner at RDF Television West.