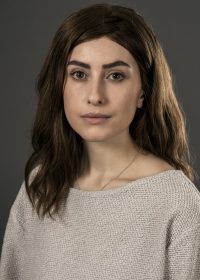 Emily Glaze is a writer and actor. As a graduate of Rose Bruford College, she received a First-Class BA (Hons) degree in American Theatre Arts. On a placement at Centre College in the United States she specialised in creative writing, before going on to write and perform a short titled Fembots at Rose Bruford’s The Rose Theatre in January 2018. She was one of the winners of the Popelei Seed Commission 2020, a project on Women in Lockdown, which features an extract from her play Mute. Previous performance credits include: Secessionville (The Rose Theatre), Fefu and Her Friends (The Barn Theatre), Hecuba (Weisiger Theatre, USA), National Youth Theatre’s Viral (City of London School for Girls, Barbican). Current scripts in development include: Mute (Stage Play), Sea Creatures (Audio Play), Fractures (Audio Play) and The Image (Stage Play) co-written with Jaisal Marmion.