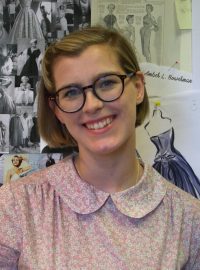 Amber has now completed the 3rd year BA (Hons) Top Up in Costume for Theatre, Film & Television. During her time at BOVTS she has embraced all aspects of the course; costume construction, dressing and supervision for theatre and film production. During her training, Amber has specifically focused on costume construction and tailoring. She has undertaken several industry work placements, most recently as a workroom trainee on Matilda (Netflix) and The Witcher (Netflix). She has also spent time working at ‘Milliners Guild’ on Priscilla The Queen of the Desert, The Spanish Princess and Sister Act.

Far From The Madding Crowd