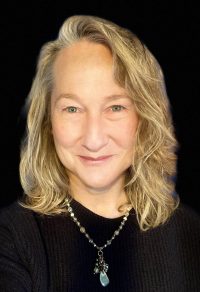 Sue began specialising in voice in 1984 upon graduating from University College London with a BSc (Hons) degree in Speech Sciences, and began practising as a Speech and Language Therapist.

She was privileged to work as honorary research assistant to Dr Frances MacCurtain in her pioneering work in the measurement of voice, before going to work in Newcastle upon Tyne with people with a wide range of voice disorders.  Sue established the first clinic in Newcastle for the assessment and treatment of swallowing disorders.

Drawn to combine her passions: language, acting, dialects and voice, she completed the diploma in Professional Voice Studies at the RCSSD, graduating with distinction in 1988.

Sue then began teaching voice at Central and Guildhall and went on to work as a freelance speech and dialect tutor at Arts Ed, Drama Centre and LAMDA.  She taught voice, speech and dialects at The Actors Centre for seven years.  Sue became Senior Voice Tutor at RADA in 1991 where she taught voice, speech, text, sight-reading and did remedial voice and speech work for many years.  She also taught on the MA course, the annual course for professional Japanese actors, the summer school programme and represented RADA on numerous teaching courses in New York.

Theatre work includes: voice and dialect coach on Aspects of Love (The Prince of Wales Theatre), working with lead actors Ann Crumb and Michael Ball: voice coach to Dustin Hoffman playing Shylock in the Sir Peter Hall production of The Merchant of Venice (The Phoenix Theatre).

Sue has taught many actors, singers and professionals across a wide range of fields in her work as a freelance voice and dialect teacher and as a Speech and Voice Therapist.