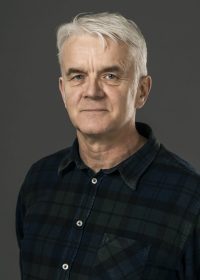 Paul has been a Director, Actor and Teacher for over thirty years.

He has been Assistant Director at the Swan Theatre Worcester, Associate Director at Derby Playhouse Theatre, Director of Drama at Pangbourne College Berkshire and Course Director of the BA (Hons) Acting course at Birmingham School of Acting.

He trained at LAMDA and won the 1985 Laurence Olivier Award, as Actor of the Year in a Musical ‘The Hired Man’. He also created the role of Harry Bright in the original production of Mamma Mia at The Prince Edward Theatre London.

Radio includes: Any Bloke, Saplings, The Archers, The Climb, The Waterloo Model, Poseidon’s Gold, Gilbert Without Sullivan, Julie and the Prince, The Bribery Warehouse and The Music Teacher.

As a director: Women in Love, Laurel and Hardy and Outside Edge (Derby Theatre), The Dreaming and The Tempest (Birmingham Crescent Theatre), The Secret Diary of Adrian Mole (The Rose Theatre), Ladybird (BOVTS), A Christmas Carol, Guys and Dolls and The Comedy of Errors (The Drake Centre, Pangbourne), Time and Time Again (Frinton Summer Theatre) and The Dreaming (The Union Theatre, Southwark).

For BOVTS: The Beaux’ Stratagem, Our Town, The Love of the Nightingale, The Mill on the Floss, Mrs Beeton Says, The Snow Queen.