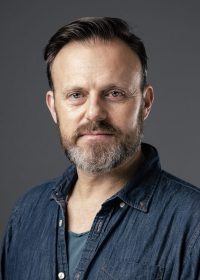 Paul has been a director and actor for over fifteen years. Having graduated in 2000 from GSA he has worked extensively as an actor in theatres such as The National Theatre, The Young Vic, Theatre Royal Bath and Birmingham Rep. Paul has worked as Artistic Director for Heartbreak Productions and is also a teacher and facilitator, teaching students from primary school to Masters level.

Acting credits include The Alchemist, Present Laughter, The Hour We Knew Nothing of Each Other and The Odyssey at The Royal National Theatre, After Dido – The Young Vic, A View from The Bridge – The Touring Consortium and Theatre Royal Nottingham, Dracula at The Birmingham Rep, Laertes in Hamlet, Paris in Romeo and Juliet, Lysander in A Midsummer Nights Dream for Creation Theatre Company, Sir George Versatile in He’s Much to Blame at Theatre Royal Bury St Edmunds, Terry, Martin, Stewart and Earnest in Confusions, Brian in Joking Apart at The Mill at Sonning.

Directing credits include Far from the Madding Crowd (BOVTS), The Nativity – A Donkey’s Tale (BOVTS), Much Ado About Nothing, The Secret Garden and Taming of the Shrew (Heartbreak Productions), Lady Anna All at Sea (National Tour -Resident Director), Chips by Shaun Miller and Withdrawn by Pippa Moss (Open Letter Theatre Company – Edinburgh Fringe Festival 2016), Boys by Ella Hickson at the Edinburgh Fringe Festival 2015, D!ck – The Adult Panto at The Star Inn Guildford, Titus Andronicus (assistant director) – Bold Tendencies Car Park, London, The Roses of Eyam by Don Taylor and Mike Bartlett’s 13 at G-Live Studio Theatre and Coram Boy at The Holy Trinity Church in Guildford.