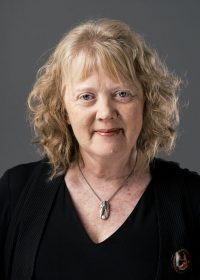 Jill holds a BA Honours degree in Fashion and Textiles (John Moore’s University), studied Wardrobe at the Bristol Old Vic Theatre School and has spent over 25 years working in the Film and Television Industry.

Jill began her career cutting patterns, making costumes and dressing in Repertory Theatres and then worked as a dresser and then supervisor for TVS in Southampton on numerous programmes including sitcoms, live comedy shows, long running drama series including The Ruth Rendell Mysteries and large light entertainment shows such as Summertime Special.

She was Head of Costume at the Bristol Old Vic Theatre School for eight years and then ran the workroom at Bristol Costume Services for two years before going freelance where she mostly worked on set for television companies, working as a stand by on set to supervising productions and Designing Dramas for Independent Television and the BBC, as well as working in many Film and TV costume workrooms.

Jill returned as Head of Costume in 2017 and uses her experience and industry contacts to nurture and guide the students and see them through to successfully gaining employment in the Industry.