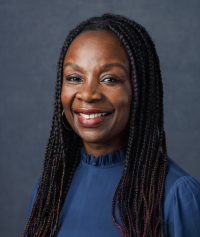 Hanna is a British Ghanaian director, producer and qualified drama teacher.  She has been creating theatre with diverse communities within Bristol since graduating from Dartington College of Arts in 1996. Her work reflects her desire to explore the intersections of race and gender through devised performances, contemporary and traditional texts. She has a rich history in working for notable companies, such as Kuumba Afrikan Caribbean Arts Ltd as Arts Development Officer, and as a theatre facilitator for Bristol Old Vic, The Egg (Theatre Royal, Bath), Calling the Shots Film Company, Acta Centre, and Travelling Light Theatre.

She is a Forum Theatre practitioner and co-founded Transparent Theatre in 2004. In this company, she worked in collaboration with Bristol Gangs Project and Community Resolve to create work, which examines conflict resolution. She also co-founded DAB (Diverse Acts of Blackness) theatre workshops in partnership with the Arnolfini and the University of the West of England. DAB supported adults of African heritage to develop their creativity through exploration of  Black British plays.

Hanna has directed staged readings such as Arinze Kene’s Little Baby Jesus for Missing Pieces, a company dedicated to raise the profile of Black playwrights. She has also directed text projects for BOVTS, including debbie tucker green’s ear for eye. More recently, she directed the one-woman musical Dawta produced and performed by Dionne Draper. Prior to joining BOVTS, she worked with award-winning director Amy Draper and writer Roger Griffith MBE on research and development projects with a social justice focus.