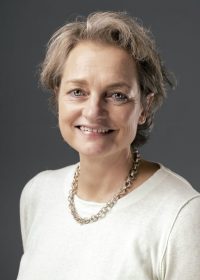 Fiona trained in technical theatre at Rose Bruford College, before embarking on a career in stage management, working at Manchester Royal Exchange Theatre Company and the Royal Shakespeare Company.

She moved into the TV industry in 1990 in London, joining the BBC’s Drama department as a runner. Following her move to Bristol in 1993, she worked both for the BBC and as a freelancer for a variety of television dramas as a location manager and producer, before going on to manage production liaison for South West Screen and Creative England.  In response to the BBC’s 2009 decision to relocate production of dramas such as Casualty to Cardiff, Fiona successfully lobbied Bristol City Council for support in retaining production industries in the city. In 2010 she went on to establish The Bottle Yard Studios in previously disused warehouses on a seven-acre site situated on the southern outskirts of Bristol. The Council-owned studios are now established as one of the leading production facilities in the country, contributing greatly to the millions generated by the media sector for the local economy each year. Fiona moved to BOVTS as Principal and CEO in August 2020.

Fiona sits on the Royal Television Society West committee, the BBC/Bristol City Partnership Steering Group, the One City Economy Board, is a Trustee of the Cathedral Schools Trust and a member of the Society of Merchant Venturers. In recognition of her ‘exceptional contribution to film and TV’, she was awarded an Honorary Degree of Doctor of Arts in 2019 by the University of the West of England (UWE Bristol). In 2017 she received the Women of the Year Award from the Bath Chronicle & Bristol Post for outstanding leadership.