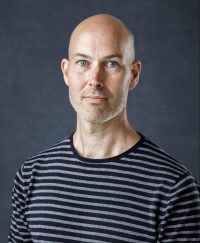 David is an award-nominated playwright and dramaturg based in Bristol and has been making and developing new plays in a wide variety of contexts since 2002.

His work includes commissions for Half Moon, Theatre Royal Plymouth, Chichester Festival Theatre, Papatango, Forest Forge, Theatre West, Kilter Theatre, Shooting Fish, Blue Brook Productions/Tobacco Factory Theatres and the egg Theatre Royal Bath where he was a Leverhulme Incubator Scholar in 2015. He has also co-created work internationally at the British School of Beijing and with Korea National University of Arts, written for site-specific and participatory binaural audio, and has been a playwriting fellow and writer on attachment at Bristol University and Bristol Old Vic.

He has contributed to numerous writer development programmes including Soho Theatre (Literary Assistant), New Writing South, Ustinov Studio Bath, Hull Truck, Tobacco Factory Theatres, Bristol Old Vic, Theatre West, Theatre Royal Plymouth, Theatre Writing South West and Graeae, and as dramaturg has worked with award-winning devising companies including Fine Chisel, Dirty Market, Theatre Rush and Scratchworks, with live artists and performance poets, and on interdisciplinary theatre projects. He has convened modules in dramaturgy, playwriting and adaptation at Exeter, Bristol, Bath Spa, Brunel and City University and taught for international schools including the Western Academy of Beijing and the Danish National School of Playwriting. He is an Associate Lecturer on the MA Writing for Performance and Dramaturgy at Goldsmiths College, author of Contemporary British Drama (EUP, 2010) and contributor to Modern British Playwriting (Methuen) and Studies in Theatre and Performance.

News Keep up to date with BOVTS news