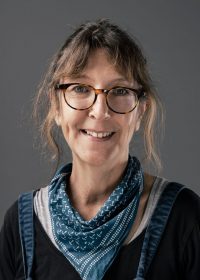 Cathy trained in Fine Art and Theatre Design and has enjoyed a long and rewarding career as a freelance scenic artist based in Leeds, London and Scotland working alongside friends and colleagues in the industry.

West End shows include Beauty and the Beast, We Will Rock You, and League of Gentlemen.

Staged Civic Events including Nelson Mandela becoming an honorary freeman of the city of Leeds.