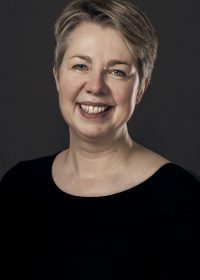 Carol Fairlamb has been Head of Voice since 2012.  Carol holds a Drama and Dance BA (Roehampton Institute), an MA in Voice Studies (The Royal Central School of Speech and Drama) and a Post-Graduate Certificate in Education (The Institute of Education).

For twelve years Carol worked as a freelance voice and dialect tutor (Royal Central School of Speech and Drama, ALRA, Oxford School of Speech and Drama, Drama Centre, Italia Conti, LAMDA) and as a full time teacher at Arts Ed until her move to BOVTS. She coached extensively for the corporate sector in the UK, Thailand, Japan, USA, France and Switzerland and was Resident Voice Coach for Sydney Theatre Company where she worked with Cate Blanchett, Philip Seymour Hoffman and Hugo Weaving.

2022 MFA Graduates Showcase Discover the next generation of award winners

About Us
FAQs Got a question? Look here