Robbie is a set, costume and video designer for theatre. He has worked on a range of fringe and mid-scale shows and is excited by bold characterful costumes, dynamic set reveals and cohesive, striking design choices. 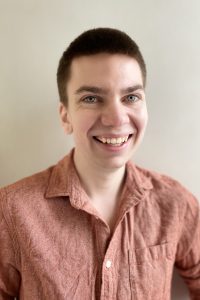 In collaboration with director Gemma Fairlie, I designed a contemporary adaptation of Henry VI, set in a modern, corporate office environment.

Power struggles initiate around a large conference table before chaos takes over and we enter a world of blood, rubble and violence. I wanted the design to acknowledge the world the characters are fighting over, with a two-dimensional corporate map in the first act that gets swallowed into a world of rubble during act two.

Video screens play a mixture of news and corporate video to give a
sense of the wider world and, like the set, become increasingly distorted and dangerous as the action progresses.

The Last Days of Judas Iscariot

The show takes place in a courtroom in purgatory in a reimagined afterlife, a pastiche of New York City.

We wanted to create clear definitions in the costumes between characters from heaven and hell, and using a very neutral palette for our purgatory characters allowed us to bring out statement costumes for individual witnesses.

We were inspired by New York in the 1970s as a city of extremes of luxury and poverty and used fashion and style from the era to give the costumes a timeless feel, alongside added details which made the characters feel otherworldly. 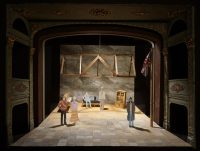 I worked with director Yuxuan Lui to create this speculative design for Caryl Churchill’s Cloud Nine. The play takes us from 1800s colonial Africa in Act One to 1979 London during Act Two, and we wanted the design to follow the social changes and societal collapse of both the periods and the characters. We explored how feelings of loneliness and emptiness can exist in environments of both control and freedom, and how we could convey these ideas within the design.

Results 2022 We look forward to welcoming you!