BAFTA Award-winning make-up and hair & prosthetic designer who has worked in TV and Film for over 20 years. Credits include: Casualty, On Chesil Beach, The Casual Vacancy, New Worlds. Teaches: Make-up and Wigs.

Julie has over 30 years experience in Costume Supervising and making. She was Costume Supervisor at the Bristol Old Vic for eight years before going freelance. As a freelance Supervisor she worked on many productions all over the UK. Julie is currently working at Bristol Costume Services and works with the Costume Students on the International Course’s final year Show. Teaches: Costume Supervision.

Textile Artist and Designer, Kate has exhibited at fairs all over the Country and has been awarded and commended in the Clothworker’s Foundation Awards on several occasions. Teaches: Machine Embroidery.

Production and Stage Manager for live theatre and events. Lisa has worked extensively in the UK on tour and in the West End, and toured internationally. Teaches: Stage Management

Freelance Lighting Designer and Re-lighter with credits in all forms of Physical Theatre and is a regular lighting designer for Gecko. Teaches: Lighting

Freelance props maker, puppeteer, puppet maker and workshop facilitator. Originally from Venezuela Cori has worked with a vast range of companies across the world. Teaches: Prop Making and puppetry

Much of Emma’s work involves puppet design and fabrication and she has produced puppets for stage and screen and her work has toured internationally, from Holland to Hong Kong. Recent projects include Yana and the Yeti (Pickled Image), Outpost (Green Ginger) and Much Ado About Puffin (Open Attic). Teaches: Prop Making and puppetry

Set and Costume Designer with over 25 years of experience, working all across the UK including Hull Truck, Northern Broadsides, Everyman Theatre Cheltenham, York Theatre Royal and Nottingham Playhouse.

With a background in fine art Sarah became involved in film and theatre when she worked as a set builder, painter and model maker. Since training in Theatre Design, Sarah has worked on site specific productions, film and numerous theatre shows. Sarah recently designed How to Disappear Completely And Never Be Found for BOVTS.

Set and Costume Designer who has worked extensively in theatre, TV, Film and events. Zoe is also Co-Artistic Director of Pins and Needles Productions. Zoe’s work has been seen across the UK and internationally.

Sue is an experienced Theatre Designer and tutor. Her work has been seen at venues including: Contact Theatre, Library and Forum Theatre, Oxford Playhouse, York Theatre Royal. Sue works part time as the set design tutor in the drama department at Bristol University.

Sarah graduated from BOVTS in 2012 and works as Set and Costume Designer. Sarah is designing our 2018 West Country Tour of The Mill on the Floss. Recent designs include: Bugsy Malone, The Blue Road (Royal and Derngate, Northampton), Richard III (Arcola Theatre).

A maker and a teacher of making. David makes sculpture, model-making, painting, graphic work and design. David has lectured in the UK and abroad and is the author of the book Model-making: Materials and Methods. Teaches: Model making master-class.

Provides a drawing service to the Theatre and Entertainment Industry, he specialises in assisting Set Designers, Production Managers, Theatres and Contractors with Design drawings. Simon has a background in Theatre Design, he worked for five years with the production office at the Royal Opera House, as CAD draughtsman and Assistant to a Production Manager. Teaches: CAD production process.

Trained as a theatre designer but eventually metamorphosed into a scenic artist and ran the scenic painting department at the National Theatre for 28 years. During her time there she received the Rayne Award and the Young Vic Award. After teaching for a year at the Hong Kong Academy for Performing Arts she returned to London and now works in a freelance capacity. Teaches: Figurative painting and Woodgraining and Marbling.

Francesca is an Artist, Painter and Art Director in stop-motion animation. Francesca painted sets and scenery in many theatres around the country, mostly at the National Theatre, and on films and TV. She was Art Director on Fantastic Mr Fox and ParaNorman and Production Designer on Inzomnia, Mexico’s first stop-motion feature. She teaches Design for Animation at NFTS and painting at the RWA. Teaches: Figurative Painting

Debbie trained at The Central School of Art and Design and served an apprenticeship in the Scenic Art Department at the RSC.  During a long career she has worked as a freelance Designer and Scenic Artist in theatre, film, TV and museums both at home and abroad. She now mainly works in the South West mostly in the TR2 workshops in Plymouth on major touring productions for noted production companies. Teaches: Freelancer Scenic Artist and Tutor.

(Subject to change each year)

(Subject to change each year) 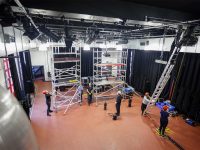