Bringing together four years dedicated to redefining the boundaries of conservatoire training, simultaneous performances of Otis and Eunice were performed to audiences at both the Bristol Old Vic Theatre School and Royal College of Music on 29 and 30 March.

Otis and Eunice was the culmination of the Virtual Conservatoire project, committed to creating new potential for live performance and performing arts collaboration.

Created with immersive theatre makers Raucous, Otis and Eunice is a modern retelling of Orpheus and Eurydice featuring actors from Bristol Old Vic Theatre School, RADA, LAMDA, dancers from the Central School of Ballet, and music written and performed by RCM and RAM musicians.

The production was performed as two different standalone shows. Staged simultaneously at Bristol Old Vic Theatre School and the RCM’s Britten Theatre, the shows were linked through dual narratives concerning the disappearance of Eunice. Audiences in each venue were also able to see the partner narrative unfold onscreen, through a live high definition video link using Low Latency (LOLA) technology.

Sharon Clarke, Creative Director at Raucous explains: ‘The process for making Otis and Eunice followed an unknown path. Trying to write a meaningful script that encapsulated live streaming, while working between six partner organisations, in two cities while engaging over 50 students was, to put it mildly, a challenge.

The main challenge for me as a writer, though, was how to knit together two different stories that collided through live streaming and ended up making sense to both audiences. Then I needed to work out how to introduce original composition, dance and musicians to an already complicated play. All within a matter of months.

The composers, working to a pretty strict brief from me, weaved their magic into original songs and score, the technical team problem solved this behemoth of a project with great humour and superb ingenuity, the performers just got stuck in and started to play as soon as the script was in their hand, the ingenious designers and directors, all lecturers, were stalwarts in making the pieces fit and making me laugh when the going got mind-bendingly complicated.

This is new theatre. This is a new way of teaching theatre. It has been a bold and brave undertaking from the Virtual Conservatoire team, who are preparing students to work in the digital age and introducing two audiences across two cities.’

Over the last four years, conservatoire facilities have been transformed into state-of-the-art digital spaces that enable creative collaboration between the consortium’s students and partners across multiple locations, in real time. The result is a new template for conservatoire training, which pioneers digitally enabled pedagogy and practice, and the scope to transform live performance art into a multi-location experience. 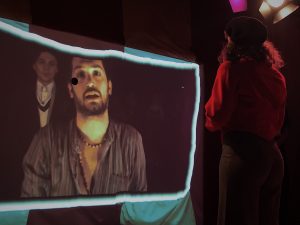 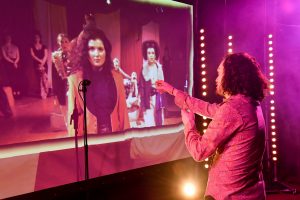 The Carnival in Bristol 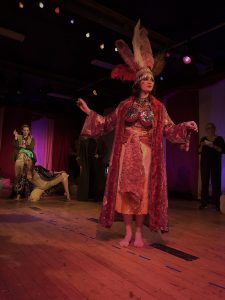 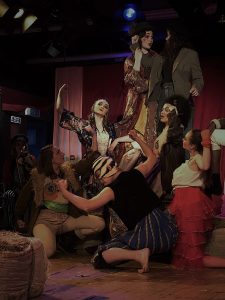 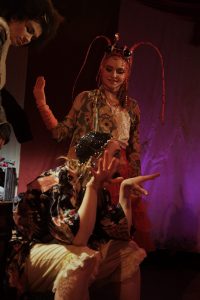 Hear more about the theatre-making process behind the show in the trailer, featuring interviews with Bristol Director, Technical Producer and the cast.

Training at BOVTS set me up with the skillset, confidence and connections for the career I now have as a freelance theatre designer. Max Johns, MA Performance Design Alumni

Get Back in Touch Calling all alumni