After a summer term unlike anything in the School’s history, this week BOVTS bids a fond farewell to Principal Paul Rummer who is retiring after thirteen years at the helm of the Theatre School.

Paul joined the School in March 1984 as Head of Stage Management, having worked as a freelance stage manager, company manager and production manager for a variety of theatre companies, including Bristol Old Vic. He became Associate Principal of the School in 1989, developing the School’s technical training to give it a national profile, and ensuring teaching remained up to date with latest industry practices. Paul became Principal of the School in 2007, following the retirement of Christopher Denys.

Paul’s tenure has been a period of significant growth and change for BOVTS. This has included the School’s continued and full transition into the higher education sector; the broadening of the range of backstage and technical courses on offer; and considerable modernisation including the development of the School’s link building, finally opened in 2015. Throughout this time, and under Paul’s leadership, the School has continued to consolidate its reputation for world-class training.

On hearing of Paul’s retirement, Dan Winch, BOVTS technical alumnus and Producer of A Very English Scandal, Quiz and the final series of Broadchurch said: “Like so many, I’m indebted to Paul for the experiences I took from Bristol Old Vic Theatre School many years ago. Paul wasn’t Principal of the school until a few years after I had graduated, but he’s been at the very heart of it for as long as I’ve been part of the BOVTS family.

“Paul’s extensive knowledge and infectious personality have radiated a sense of fun and excitement throughout the School. Constant creative development and exceptionally high standards have remained paramount for Paul, and he’s done both the Theatre School and indeed the Bristol Old Vic legacy proud.”

Jenny Stephens, School Artistic Director, summarised Paul’s dedication and impact on BOVTS: “Some of the best values that are ingrained in the School have been created and fostered by Paul; the welcoming ethos, the nurturing of the individual, the sense of embracing challenge, of problem-solving and a thorough-going professionalism. Paul has always insisted on seeing students as ‘young professionals in training’ and this focus on being ‘industry ready’ lies at the heart of the School.

“Through Paul, we all recognise the privilege it is to be part of the BOVTS community – a community that has been guided and shepherded by him.” 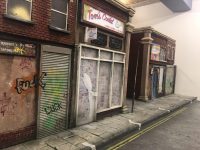