BOVTS grad Josh O’Connor has won Best Performance by an Actor in a Television Series, Drama at the 2021 Golden Globes.

In an acceptance speech that praised his fellow co-stars, particularly Emma Corin who won for her role as Princess Diana, Josh also took a moment to address the audience:

“I just want to say I am very lucky to work in this period and there’s so many people who are unable to work and are alone and isolated. And I hope we can all collectively put mental health at the forefronts of our minds.”⁠ ⁠

“The first thing about him – he’s such a nice bloke, he was a model student, always on time, always had a nice smile. He did all the work I asked him to do with a very pleasant nature. That’s Josh.

I last met him one night at The Alma Tavern in Bristol, about two years ago. I was having a pint with a few acting students – he walks in with his girlfriend and it’s like we said goodbye yesterday – ‘Oh hello Gary’ – we just carried on. He’s a lovely guy. He’s a great actor and a lovely guy.

About ten months ago, I spoke to him, he was due to play Romeo at the National, last September before it was cancelled – he was even upbeat about that – ‘Oh well, when this is all over I’ll do it.’ Nice guy. That’s Josh.” 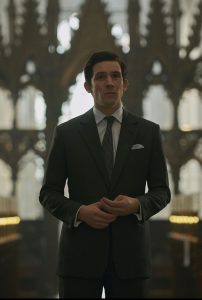 Congratulations Josh! We can’t wait to see what you do next.