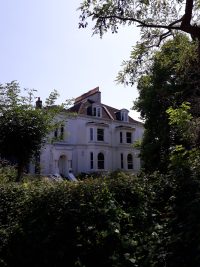 Almost everyone who knew Elwyn would, when talking of him, at some point, probably after a little sigh, say the two words, “Dear Elwyn,” and that is how I think of him.

We met first as actors in Lancaster, then again as teachers at BOVTS. During a dark period in my own life, Elwyn’s huge empathy helped me through, and I remain deeply grateful to him.

Under Chris Denys (BOVTS Principal, 1980 – 2007), Elwyn became the Assistant Principal of the School, a post in which he had to make full use of his twin talents of artistic sensibility and bureaucratic efficiency (a combination very rare in our business!) along with his great empathy and diplomatic skill.

He was a gentle and kindly soul who could be moved to explosive fury by intolerance, unfairness and injustice. His deeply-felt principles which were embodied in his daily life made some of the work very stressful for him and I think when he decided to leave the School it was to leave some of the stress behind.

His students will remember him not just for his kindness, generosity and huge reliability but for his masterly direction of productions. He was always very proud of his compilation Blowing The Blues Away, which toured in the early 1980s and I particularly remember his skilful work with David Hare’s plays later on – and, of course, for his warm-ups –