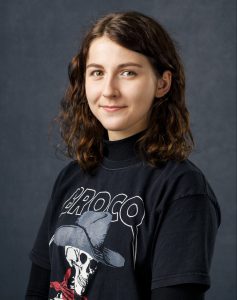 Designed by Bronia Housman, ‘Ba the Reindeer’ was made collaboratively with Meriel Pym during my first term at BOVTS. Made with heat-formed plastazote, the neck-brace has a quilted cover edged with self-made piping, shaped around the base of the antlers to give the illusion of growth from the join with the neck-brace. They are then held upright and in-place with the cotton-tape ‘bridle’, to which the ears are attached.

Bathsheba emerges as a newly wealthy woman not long after the beginning of ‘Far From the Madding Crowd’, and she needed a bold and glamorous dress to show it, as designed by Max Dorey. I flat-drafted and constructed the 1890s style gown, made from faux taffeta with hand-stitched antique beaded appliqués on the bodice for eye-catching effect.

Thoroughly researched and realised in exquisite detail, the making of this fully handsewn 1790s suit utilised historically accurate construction techniques based on extant garments found in the Olive Matthews Collection at Chertsey Museum, and ‘Tailleur’ from Diderot’s ‘Encyclopédie’, amongst other resources.