Holly has completed her final year specialising in props at Bristol Old Vic Theatre School. She hopes to go on to continue working as a props or art department trainee in film and TV and has become interested in production designing for her own short films. In props she has begun specialising in different types of mould-making and costume props. Previous credits for BOVTS include: Props Supervisor on 20,000 Leagues Under the Sea and Troilus and Cressida Production Designer on graduate film, The Book Club and Art Department Coordinator on short films, Dreamers, Tomorrow and Gracie Jones. She has also worked as Production Designer on her co-created independent short film, Hotline. 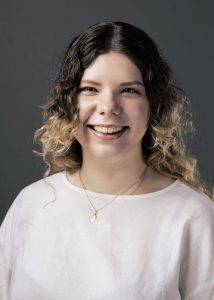 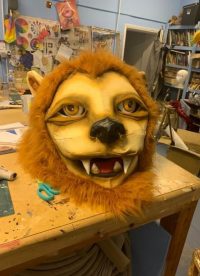 I made the clay maquette from Tish’s designs, then designed the cutting pattern and built the base of the head from plastazote. I used a heat gun to mould the foam then built up the fabric layer using an edited version of the same cutting pattern. The teeth and claws were also plastazote but dipped in latex. Inside I fixed an adjustable helmet for stability and built up foam around it to secure the head. 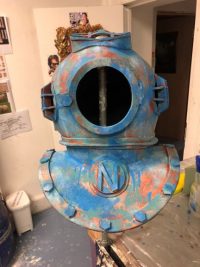 I made the helmets based on Maria’s design and instructions. There were five of them, made from plastazote cut to a pattern and moulded together with a heat gun. They were then painted copper, then built upon with copper metallic powder and the patina layer built up with greens and blues to match the design palette. We also inserted blue LED lights inside the rim of the helmet to highlight the actors face.