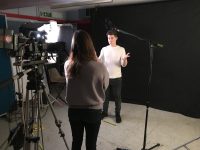 Actress and Director, Lorna spent several years with Birmingham Rep and made her television debut in the 1990s. Lorna is known for her roles in BBC shows Doctors, Grandpa in My Pocket and Tikkabilla. Lorna has also directed multiple episodes of Doctors.

For over 15 years Bashart has worked in commercials, music videos and features. Bashart is a Director of Photography and has recently been working on Channel 4 shorts.

BAFTA winning director and writer of critically-acclaimed drama and documentary programmes for all the major UK broadcasters and key international broadcasters. Before directing, Rupert worked creatively on iconic feature films and TV series as an editor, supervising sound editor and as an art director. Teaches: Acting to Camera

An award-winning dramatist turned filmmaker with over twenty years experience writing, producing and directing film, television and theatre. Tim works with artists, performers and commissioning bodies across the UK, producing a wide range of work from documentary and TV commercials to independent art films, comedies and historical drama.

Trained actor and voice over artist. Vince has extensive stage and screen credits, including credits with Shakespeare at the Tobacco Factory, Salisbury Playhouse, Bristol Old Vic and in the West End. Screen credits include: Three Girls, Casualty (BBC); Where the Heart Is (ITV), The Fifth Element. Teaches: Acting to Camera

Tiggi has worked extensively in the TV industry for over 30 years, starting as a Stage Manager then Floor Manager she advanced quickly to Unit Manager/First Assistant Director. Notable credits include Man Vs Wild Bear Grylls taking her across the world. Teaches: First AD