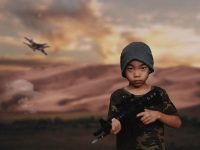 Set in a fictitious near-future but inspired by ancient myth

Welcome to Thebes offers a passionate exploration of an encounter between the world’s richest and the world’s poorest countries in the aftermath of a brutal war. This is an urgent, thrilling and epic play for our time.

Faced with an impoverished population, a shattered infrastructure and a volatile army, the first democratic president of Thebes, Eurydice, promises peace to her nation. Without the aid of Theseus, the leader of the vastly wealthy state of Athens, she doesn’t stand a chance. But Theseus is arrogant, mercurial and motivated by profit. A swaggering opposition circles, impatient for insurrection. The body of the former dictator lies unburied.

MFA Class of 2021 Graduating this summer