Troilus and Cressida Love, loss and the Trojan War.

Love, loss and the Trojan War

All’s fair in love and war? Not according to Shakespeare. Troilus and Cressida is his critique of both – proving that fighting for honour is never really that honourable, and hearts can be turned despite all protestations.

Part comedy, part tragedy, part satire, part history – the play defies binary categorisation. Brimful of posturing and pouting, it’s an exploration of gender stereotypes and how dangerous they are for all of us, both in the past and the present.

The production will explore the swagger of ego, and the danger of infatuation, in the setting of the fictional Ilium High School. Against the explosive backdrop of American football and teenage angst we’ll pit the Greeks against the Trojans to find out who plays fair and who is just a player. Will the star quarterback ever play again? Will the Prom turn out to be a disaster? And will Troilus find the true love he dreams about or is it all just teenage fantasy?

We’d like to extend our thanks to the following individuals and groups whose support of this production is much appreciated: Active Lifestyle Centres, Alyssa Van Delle, Arbor Ales, Bristol Blades, Chipping Sodbury School, Coldharbour Gallery, KP Badges and Trophies Ltd, OYO Flagship The Regency Hotel Bristol, Saresh Singh, Tiger Trophies, University of Bristol Hockey and Mixed Lacrosse Clubs, Jess & John Waring, Westberries Hockey Club. Special thanks to Sue Ellicott, John Mauchline, George Malin and all staff at the Redgrave Theatre who have worked with BOVTS to make this production possible. 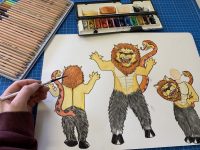 Tish Mantripp, Costume Designer, and Eliza Podesta, Set Designer, are graduating students from the Theatre School. Tish is completing the MA in Performance Design whilst Eliza is in her final year of the BA (Hons) in Production Arts. Here, they outline their vision for the production, and discuss how this has been realised for the stage.

Where did you start with the design for Troilus and Cressida?

Tish: The design process started with several conversations with the Director, Gemma Fairlie, drawing parallels between modern society and Shakespeare’s writing. We looked at how educational institutions are a way in which you can examine a larger society on a micro-level; it’s a place where both values and prejudices are learnt.

Eliza: There are lots of similarities between war and school, for instance, popularity, fights, drama and gossip. Through this, we were able to bring the world of Ilium High to life.

Tish: We decided to relocate this play between two warring American high school football teams. We saw a link between how American high schools glorify sport and athleticism and the way in which the Greeks and Trojans worshipped and adored their heroes and warriors during the Trojan War.

What have been the most challenging aspects of the design process?

Tish: It’s been challenging designing costumes for a play with such a vast cast of characters. Many of the actors have swapped gender to play their characters, which has been great fun. The team worked with drag kings and drag queens to help the actors get into the physicality of the characters, but the costume design will also have a crucial part to play in how these characters are brought to life.

Eliza: The most challenging part of the design process has been figuring out how to make so many different locations work on the stage. Through collaborations with all the different departments we have adapted the main high school gym to also work as a principal’s office, a house, a football field and many more.

What can the audience expect from your design?

Tish: The audience can expect a completely new, refreshing take on Shakespeare. The show is extremely physical – it fizzes and crackles with the charged energy of teen love, and then gallops along at quite a pace on the sports field – where the two warring factions meet.

Eliza: They can expect a colourful and modern adaptation of a classic Shakespeare play. They will be transported into another world of energy, passion and secrets!

Do you have a favourite aspect of the design?

Tish: A lot of the designs for this show bridge the gap between what is considered costume and what is considered a prop. This has become an exciting collaboration opportunity between production arts and costume students at BOVTS, working together to realise my designs. One costume I am particularly excited about is the Chimera – a mythical lion, goat and snake hybrid beast – which is the ‘Greek United’ football mascot worn by the character Thersites. Seeing it come to life over the last couple of weeks has been a real treat! 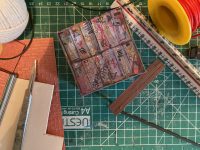