Directors’ Cuts: North of Providence and Dolores They listen for half an hour an’ ya get stuff out

'They listen for half an hour an’ ya get stuff out, but I don’t feel any different.'

NORTH OF PROVIDENCE AND DOLORES

North of Providence journeys through a painful crisis between brother and sister, uncovering old family wounds on the last day of their father’s life. Bobbie has burrowed himself in his parents’ home and is confronted by the over-bearing Carol to come to the hospital. Bobbie attempts to push Carol and the reality of his dying father away, but she persists, awakening him to the bitter truth.

“In ‘North of Providence,’ Edward Allan Baker takes a painful domestic crisis and transforms it into a one-act play of emotional depth and conviction.” – New York Times

Set in Rhode Island, Dolores is the story of two sisters drawn together by domestic violence which influences the lives of both characters far more than they admit to anyone, even themselves. Sandra is home alone, enjoying her weekly break from her husband and kids, when Dolores shows up with a black eye from her abusive husband. She is in desperate need of Sandra’s help. Through the course of the play, it becomes clear that Dolores is an unwelcome explicit reminder of the brutality Sandra tries to overlook in her own life.

“Baker’s writing is delicate and sensitive – he has the unique ability to create situations and conversations that are both humorous and disturbing.” – Beyond Broadway

This amateur production of “North of Providence” and “Dolores” is presented by special arrangement with Josef Weinberger Limited.

The Directors’ Cuts season is a programme of contemporary theatre presented by the four graduating directors from Bristol Old Vic Theatre School and featuring work by acting, design and production students.

Now in its fourteenth year and at The Wardrobe Theatre for the fourth time, the Directors’ Cuts season is firmly established in the Bristol theatre calendar. It has a reputation for showcasing fresh, vibrant and cutting edge theatre work by some of the finest emerging talent in UK theatre.

Diverse and highly charged, this is a season of provocative plays which all have an important relevance in today’s society. 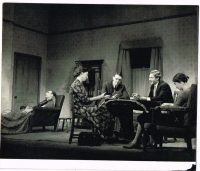