Let the Right One In An enchanting, brutal vampire myth

Let the Right One In

A stage adaptation by Jack Thorne, based on the Swedish novel and film by John Ajvide Lindqvist

Oskar is a bullied, lonely teenage boy living with his mother on a housing estate at the edge of town when a spate of sinister killings rock the neighbourhood.

Eli is the young girl who has just moved in next door. She doesn’t go to school and never leaves the flat by day.

Sensing in each other a kindred spirit, the two become devoted friends.

What Oskar doesn’t know is that Eli has been a teenager for a very long time.

Recommended age: 12+
Trigger warnings: please note that Let the Right One In features violent scenes, including bloodshed and self-harm.

Our Production Arts students have produced a podcast featuring interviews with the cast, crew and designers of Let the Right One In, giving an insight into the creative process behind the show. 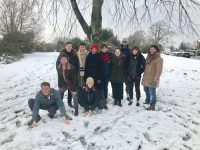 This much I have learned about directing...

Director Marcus Romer has written a blog about the directing process and what he has learnt whilst working on Let the Right One In. You can read the entry on Marcus’ blog site.

After obtaining the stage rights to the cult classic Swedish novel and film LET THE RIGHT ONE IN, Ms Rubin commissioned and produced the stage adaptation in partnership with the National Theatre of Scotland. Following the production’s launch at the Dundee Repertory Theatre in 2013, Rubin transferred the show to the Royal Court and then on to the Apollo Theatre in the West End prior to its American premiere at St Ann’s Warehouse in New York. The production won Melvyn Bragg’s 2014 South Bank Award for Best New Play in the UK, and was nominated for 4 New York Drama Desk Awards including Outstanding Play. Ms Rubin has since produced the play in Australia, Denmark, Finland, Hungary, Iceland, Ireland, Japan, Korea, Mexico and Norway as well mounting a tour of the USA.

Prior to this, Rubin produced THE MOUNTAINTOP (Olivier Award, Best New Play, 2010) at Trafalgar Studios in the West End in 2010 before transferring the show to Broadway’s Bernard B. Jacobs Theatre in 2012.

About Us
Performance venues Perform at prestigious Bristol based venues