Buzzing She thinks she’s not watched, not seen, but she is, oh, she is

She thinks she’s not watched, not seen, but she is, oh, she is

‘She thinks she’s not watched, not seen, but she is, oh, she is, she has so many eyes on her… She’ll be my way out. When the dress is done.’

At the heart of the buzzing is Kay.

And all the while, watching her, is Iris, stitching a dress, a dress made of bees.

Written as part of Graeae Theatre’s Write To Play programme, and produced by Bristol Old Vic Theatre School as a play in development, Buzzing explores connections – with ourselves, with our peers, with our families, with our online community, and with strangers.

It’s said that we’re more connected than ever today, but are those connections more fragile than we could possibly imagine?

It is recommended that the audience wear headphones for this streamed performance.

Buzzing, written by Anita Karla Kelly as part of Graeae Theatre Company’s Write to Play programme, and produced by Bristol Old Vic Theatre School as a play in development. This is an amateur performance by graduating students.

Donate to the Peter O’Toole Prize

How do theatre makers continue to work during lockdown? What does digital drama look like? How do you take a stage play as visceral and physical as Anita Karla Kelly’s Buzzing, written to confront, challenge, and actively involve its audience, and present it online without losing its thrilling theatricality?

Guided by the creative talents and imaginations of all those working on the show, we have never shied away from challenging solutions – indeed there have been many times when we actively we have sought them out.

We have repurposed every form of digital media now available to so many of us on a daily basis, whether that form was designed for this purpose or not.

We have gleefully taken some incredible risks, and been rewarded and exasperated in equal measure.

The performance you are about to see is the result of this ongoing experiment, as of Friday June 19th 2020. It is performed part live, and part pre-recorded. It is neither theatre, nor film, nor TV, nor online performance, nor a hybrid of these forms, but something new and, we believe, very exciting. Like all great experiments, it can never be truly said to be finished: it only points forwards to what might be achieved in the future.

The latest thing that we have learned in this experiment, discovered only during the dress rehearsal, was that, unfortunately, YouTube won’t allow us to stream the show live, due to the nature of its content. So, what you are about to watch is an unedited recording of a dress rehearsal, performed, as are all dress rehearsals, as if you, the live audience, were with us. The final key element of the experiment is you, the audience, for without an audience we are not making theatre, we are only shouting in a room (in this case, many, many rooms scattered across the length and breadth of the country!). We are very grateful and excited for you to be joining us on this adventure, and, as Shakespeare says in the Prologue to Henry V:

‘… let us, as ciphers to this great accompt,

On your imaginary forces work.’ 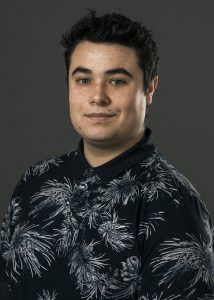 What skills have you learnt during this process which you’ll take away with you into your career?

This process is very strange for everyone. It has allowed me to prepare myself for my future career. For most students about to leave the Production Arts course we will go into a world where we will be self-employed at one point or another. This time has shown me how I should prepare myself better. Skills that we are taught at the theatre school are now being put into practice. For example, time management – I am working from home and now I am in charge of what time I start work and how long I will work for. I’ve also worked on my technical skills. I have had to teach myself and learn ways to work with Zoom and streaming technologies to help bring this new way of theatre making alive. As a Sound Designer, I’m focusing on how I can make the sound more impactful. I’m playing with the sound I can give through headphones to give a sound design you couldn’t achieve in a regular theatre setting.

What has been your favourite moment in rehearsals?

Without giving too much away I have been playing with live pitch bending of sound effects to create the idea of movement and tracking movement. It’s been something that has required a lot of testing and experimenting but when I took it into the rehearsal room it was well received and now I can’t wait to see how it will be received by our audience.

How do you feel about the upcoming live performance?

Very nervous; this is something new for all of us. I feel we have a very strong show that will be relatable to all our audience members.  I also feel a lot of people will be excited to see what the theatre school and its students have manged to create whilst having to work under restrictions such as lockdown.

What has been the biggest challenge of creating this piece?

The biggest challenge for me has been doing all rehearsals and meetings over Zoom. I’m missing being face to face to the people I’m working with. It’s harder to put across your ideas over an online meeting which means I have had to create a lot more sample sound effects for the director and cast to listen to.

Why should people tune in to watch Buzzing?

People should tune into Buzzing because it’s a very relevant production. Everyone has worked so hard to create something that when we started nobody exactly knew how it would end up.

How would you summarise the show in three words?

I've worked with visiting professionals this year that I never would have even dreamed of working with. It's been an amazing experience. Thomas Donnan, BA Professional Acting Student