"We that are true lovers run into strange capers"

Mischief, magic, lovers and fools. Enjoy twice the fun this spring with two of Shakespeare’s most beloved comedies reimagined for new audiences.

Banished by her power-hungry uncle, a disguised Rosalind – and her cousin Celia – find solace in the Forest of Arden, which is occupied by a bohemian community of New Age Travellers led by Rosalind’s father, Duke Senior. The forest provides a magical playground for self-exploration and transformation, where its inhabitants are liberated from an establishment intent on cracking down on free parties and rave culture.

Set against a backdrop of post-Thatcherism and accompanied by a throbbing acid house soundtrack, Shakespeare’s poetic and punchy ode to love and identity is transformed by Bristol Old Vic Theatre School.

The venue is fully accessible to wheelchair users, including an accessible toilet. For further details please click here. 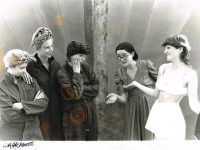 Support Us Calling all our Alumni!