Currently a Prop Making Trainee at Pinewood Studios, Elkie is a Filmmaker hellbent on creating a machine to body swap with Michelle Gondry. She has Production Designed for Channel 4’s ‘Random Acts’, BBC ‘New Creatives’ and BFI ‘Network Shorts’ where she has been able to explore her interest in the manipulation of mise-en-scène to create work with a distinct visual style.

Animator ‘To provide all people’ livestream

Head of Camera Far From the Madding Crowd (The Redgrave)

Construction Assistant Her Naked Skin, The Laramie Project and Far from the Madding Crowd.

Props Assistant on Caucasian Chalk Circle (Tobacco Factory Theatres), The Life and Adventures of Nicholas Nickleby Part One and Two (Bristol Old Vic) and Let the Right One In (Circomedia) and ‘The West Country Tours’ 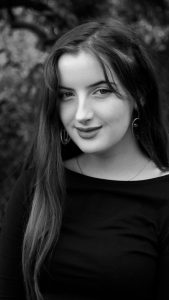 A poetic dance film that explores the journey of a survivor experiencing domestic emotional abuse.

A teenager learns that identity is more than skin deep.