Sing Out! Singing For Musical Theatre

Bristol Old Vic Theatre School excels in musical theatre. With 12 finalists and two winners of the prestigious Stephen Sondheim Student Performer of the Year Competition, our graduates have gone on to take up leads in the West End.

This five-day intensive course is aimed at anyone over the age of 18 who is interested in learning from leading professionals. You will experience a wide-range of repertoire and styles through group singing and solo work.

Workshops will include techniques to explore your singing voice, build a strong technique, develop your range, pitch and rhythm, as well as how to explore lyrics and acting through song. You will work with experienced practitioners to gain greater confidence in your voice, find out how nerves can enhance performance and practise top tips for auditions.

This course gives participants an unmissable chance to sing, explore and have fun! 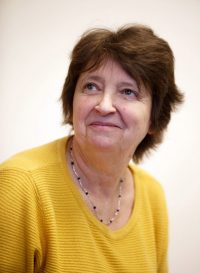 Pamela Rudge has been a professional mezzo soprano, singing teacher, vocal coach and musical director for over thirty years. She trained at the Royal College of Music and is currently Head of Music and Singing at Bristol Old Vic Theatre School.

Pamela has a wide-ranging vocal repertoire from early to contemporary music, singing opera, light opera, oratorio, recitals, concert work, performing in concert halls, theatres and cathedrals throughout the UK and also in Europe, Zimbabwe and Mali. Pamela sings as a soloist with UK orchestras in works such as Elgar’s “Sea Pictures. She is equally at home on the operatic stage playing roles ranging from Mrs Herring in Britten’s “Albert Herring” to Suzuki in Puccini’s “Madame Butterfly”. In recent years she has become more involved in chamber opera, playing roles such as Madame Popova in Walton’s setting of Chekhov’s “The Bear”, and most recently created the role of Marie Collette (a formidable pipe-smoking granny!) in the world premiere of Eric Wetherell’s “A Foreign Field”, for which she achieved much critical acclaim.

Pamela adjudicates for festivals and runs vocal workshops and singing courses for theatre companies and singing groups throughout England and in Switzerland and Cyprus. She has conducted many musical theatre shows, most notably “London Road” (nominated for Best Theatre Production in the South West) and “Mrs Beeton Says”, a world premiere commissioned by BOVTS.

Pamela has developed and adapted her method of teaching singing, building on her own considerable experience as a singer, to be able to offer a complete and distinctive singing experience which fully equips singers and actor/singers technically, musically, and in acting through song. Her students include many whose careers have taken them into West End musicals, and into roles playing members of the Royal Family in “The Crown”, as well as two winners, three runners-up, and nearly twenty finalists in the prestigious Stephen Sondheim Student Performer of the Year Competition.