Amber has embraced all aspects of the BOVTS course; costume interpretation, dressing and supervision for theatre and film production. During her training, Amber has specifically focused on costume construction and tailoring. Industry work placements include workroom trainee on Matilda and The Witcher (Netflix), employment at Milliners Guild has included Priscilla The Queen of the Desert, The Spanish Princess and Sister Act. 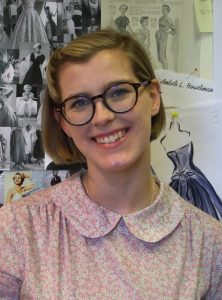 Inspired by Christian Dior’s ‘Soirée de Décembre’ Evening dress. I have created a structured gown with a pleated train, complete with a decorative bow. I have also made an under corset and net petticoat to achieve the desired shape of the era.

I was highly influenced by a particular gown worn by Marilyn Monroe, for the design and construction of this costume. The pleated/ruched bodice hugs the figure, creating a beautiful finish. The bodice sits over a full circle skirt with trailing lace and beaded detailing. I have also constructed a silk overcoat with welt pockets and a rolled collar to accompany the dress. Under the dress I have created a corset and net petticoat to achieve the desired shape of the era. | Photographs taken by Carys Leonard

I have created a tailored suit, inspired by Christian Dior’s 1947 ‘Bar Suit’. The circle skirt has been pleated by hand. To achieve this shape, the petticoat has been constructed into the skirt with matching hip padding. The silk jacket sits over the skirt, creating a classic 1940-50’s silhouette. I have also created a hand sewn peddle straw hat to match.