It was affectionately then known as the ’fruit school’ as it was close to the fruit and vegetable markets, which surrounded the theatre.

In 1954, Dorothy Reynolds and Julian Slade wrote for the Theatre School, the musical Salad Days for the Bristol Old Vic Theatre Royal. It went on to achieve enormous though totally unexpected success, with extended runs both in the West End and on Broadway.

The show gave the Theatre School the much-needed funds to move to bigger premises in Downside Road – the School’s current site. The building was officially opened in 1956 by Dame Sybil Thorndike. 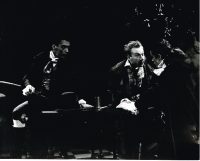 The Conservatoire of Dance and Drama

In 2003 the reputation and work of the Bristol Old Vic Theatre School was recognised by the government when it was invited to join a new scheme designed to provide secure funding for students.

The Conservatoire of Dance and Drama invited the School along with RADA, the London Contemporary Dance School and the Northern School of Contemporary Dance to be a founder member ensuring the Theatre School can take the most talented students regardless of their own personal financial circumstances.

Conservatoire for Dance and Drama

Embrace your individuality. The school is looking for each artist’s nuances and seeks to nurture and strengthen them when you study here. Eloise Richard, MA Screen Acting Student